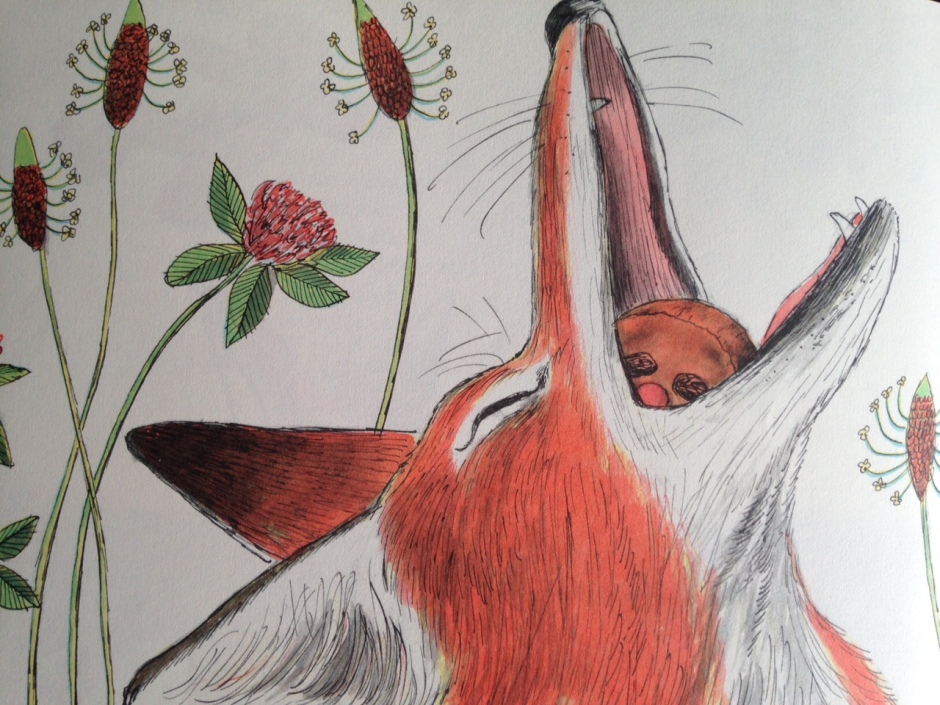 With all the amazing choice in the picture book market these days, it is sometimes easy to forget the stories which have been around for hundreds of years. While some people believe that an over reliance on fairy tales might lead our children to develop some negative stereotypes, I’m sure that as part of a well balanced selection they can be taken at face value as the magical, exciting stories that they are. Once children get to school there is no doubt that they will be exposed to lots of them, the repetition and simple structures make the traditional story an important tool in a developing a child’s literacy. I think there is also a case to be made that many of these stories have become a part of our culture, in an age of technology where the latest fad may seem quite alien to other family members, a story like these can sweep aside age differences and give different generations a common narrative that they can enjoy together.

That being said, there are so many versions of each story that the qualiy can vary massively; some are whittled down to their bare bones or are produced without much thought or feeling while others are beautifully and thoughtfully written. It can be difficult to find a really good quality edition of some of the favourites we want to share with our children. Below I have selected books that I own which I feel really bring the traditional story to life in some way, be it through illustration, the use of language or giving a twist on the original story. I hope that you find something new here to look out for and if you know of a good one that’s been missed off the list please fill me in- I’m always on the look out for a new book!

Goldilocks and the Three Bears by Emma Chichester Clark

Those of you familiar with the Blue Kangaroo books will recognise this author/illustrator but I have to confess that this book is my absolute favourite of hers. The illustrations are so beautiful and rich with detail that they will straightaway catch your eye and capture your imagination. Emma has also put lots of thought into the story adding interesting vocabulary and extra little repeated phrases which makes it really enjoyable to read aloud, especially the dialogue she creates for Goldilocks. The text is on the long side but never boring and I’m sure it is a version which will have you revisiting it again and again. Oh and the endpapers have to have a special mention because they are just amazing!

The Gingerbread Boy by Paul Galdone

This book could not be more different from the Goldilocks above. It is illustrated in a very simple way whoch reminds me a bit of a woodcut. It uses mostly muted colours and has a rustic, countryside feel to it. However, it really does capture the spirit of the Gingerbread boy for me. Some people find it a bit more challenging to read as ‘Gingerbread Boy’ doesn’t fit into the rhyme quite as well but the children I have read it to (in school and at home) have never seemed to mind. Add to that some extra characters on the cast list eg a barn full of threshers and a field full of mowers, and there is plenty of discussion to be had about when this story is set and what those words actually mean. However, the stand out page for me is the one where the fox eats the the gingerbread boy and the illustration shows the gingerbread boy’s head peeping out from between his jaws as it’s being swallowed. I have never met a child who doesn’t love that combination of wicked and funny and it really gives the end of the story an extra bit of excitement.

The Gigantic Turnip by Aleksei Tolstoy and Niamh Sharkey

I’ve owned this book for a long time and I still get excited about looking at it because the illustrations are so good. The text is faithful to the traditional story and really repetetive which again reinforces the structure for the children listening to it and gives them plenty of opportunities for joining in and being actively involved in ‘reading’ it. The old man and the old woman are completely adorable which has you rooting for them from the beginning and the muted colours are used really cleverly to create a slightly dark atmsophere around the farm. I enjoy lots of the stories published by ‘Barefoot Books’ but this one has really stood the test of time for me and I’m confident it would do the same for any little bookworm. 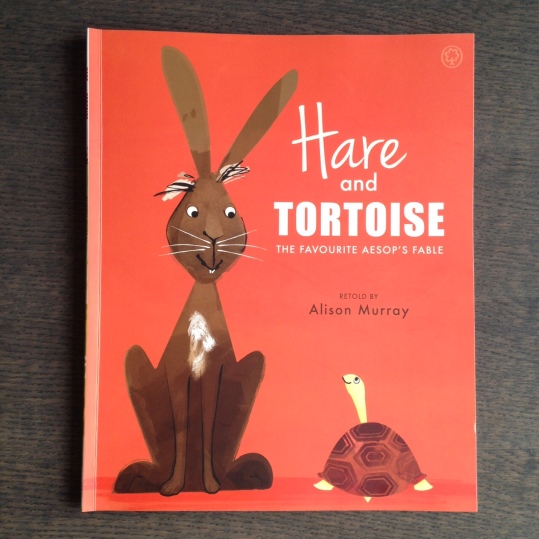 I recently went on a book binge and this is new to my collection but I already love it. The illustrations flick between anatomical style pages labelling the features of each animal, maps and more traditional layouts which contribute towards telling the story. The text is gentle enough that you feel sorry for hare rather than totally disliking him and each animal has their own little refrain which gets the children joining in quickly. I also love the care she has taken over the verbs she has chosen to describe each character and can imagine it boosting vocabulary if read several times- tootle, race, chase, wander are just some of the examples. All in all a big thumbs up for this one, a lovely retelling of a classic that everyone should know.

Classics with a twist

These have been around for many years (as a child my sister and I were obsessed with Roald Dahl’s Revolting Rhymes and could recite many of them off by heart after a particularly bookish summer holiday) and are a fun way to mix things up and explore the stereotypes which can make us wary of this genre of books. Best read once your child has a solid understanding of the original, they are usually given a comic slant and are great fun for both the reather and the audience.

The Fairytale Hairdresser series by Abie Longstaff and Lauren Beard

My daughter chose this one and it has to be said it didn’t appeal to me straight away. Firstly, it is super girly with glittery pages and the theme which links all the books together is a hairdresser/ matchmaker from what I can tell (I have to admit I have only read two of them so far- the Rapunzel one and the Beauty and the Beast one) with quite a lot of mentioning of make overs, styling and such. However, the characters do seem to be more diverse than the usual stories. Also, it did emphasise the message of looking at the person inside rather than external appearances with the beast. Anyway, if you have a daughter of a certain age they will probably love this. Plus, as I said in a previous post, it’s important to let them make their own book choices as well as feeding them the ones we love and for my daughter this fitted that criteria perfectly. 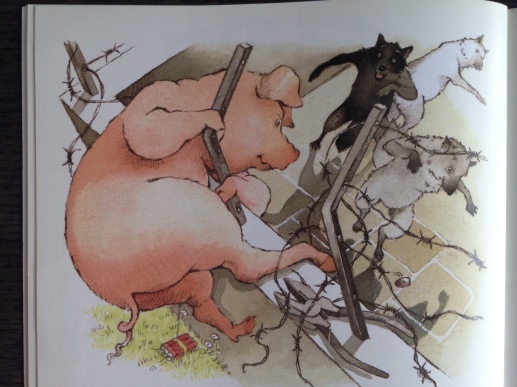 This works equally well with a class full of children or as a bedtime story. It is quite wordy but so fun that even quite young children can keep going to the end without losing concentration. The big bad pig is just about as mean as a picture character can get, the houses the wolves build become more and more elaborate (think concrete, steel girders and all manner of equipment, appealing to those children who love a construction theme) and so does the pig’s method of getting in. While the beginning is quite dark, the ending is truly magical and actually a lot less hair raising than the original and carries a great message of thinking about things in different ways to solve problems. The illustrations are detailed and beautiful- it’s Helen Oxenberry so you can just imagine how perfect they are. It will also appeal to children who might think they have grown out of the traditional stories genre as the vocabulary is challenging and clever. Big thumbs up for this one!

Of the books I’m featuring, this one is furthesy from its original form and it’s a real breath of fresh air. It features a wimpy Prince Cinders, a rubbish fairy that gets the spells wrong, a proposing princess and three hairy big brother princes who are eventually turned into house fairies and bare more than a passing resemblance to Freddy Mercury in the music video where he’s doing the hoovering. Children of all ages will enjoy this book but it’s probably best aimed at slightly older children so that they get the full force of the humour behind this book. A classic for a very good reason and perfect if you want to do something to balance out the stereotyping in the classic version. 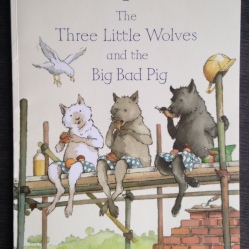 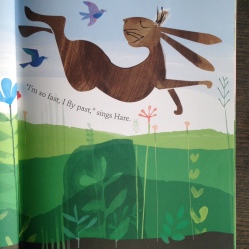 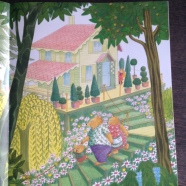 I’d love to know what your favourite traditional story was as a child and whether you enjoy reading fairy tales to your children or intentionally steer them away. My final thought is from Albert Einstein: